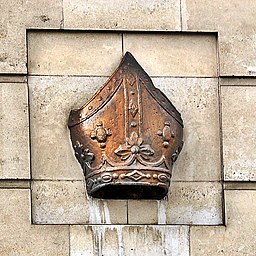 It can be a difficult experience to attend a major Christian celebration at a point when the church is reeling from yet another scandal. Last week, the Gibb report into the disgusting behaviour of Bishop Peter Ball was issued, complete not only with details that you can’t un-read, but also with far more information than was previously in the public domain on how senior figures in the C of E tried to cover it up. However, this is also the season for ordinations to the diaconate and priesthood, so at the weekend I was attending one of these in another diocese; always a cause for rejoicing, especially when you know one of the ordinands and have been privileged to share to a small extent in her journey to this point.

I suppose it was too much to expect the sermon at the cathedral to help me think through the ‘Ball(s) business’ (Peter’s identical twin brother, Bishop Michael Ball, doesn’t exactly come out of the report well, not only trying to use his influence with figures inside and outside the church to insist that Peter was innocent, but also sometimes letting Peter stand in for him at official events; if this were a novel, the editor would by now be asking for cuts). The sermon was directed to the role of a priest in making God known; entirely appropriate. But I thought I heard an acknowledgment of the failures over Ball(s) in the prayers, not in the standard wording (a fixed part of the service, and also sent to the printer long before the events of the past week) but in the tone and the use of pauses in the Dean’s delivery of the words it included:

That they may return to the way of Christ,

Let us pray to the Lord: Lord, have mercy.

At times like this, words fail us, and the set litany must take over, and lead us on.

But people attending ordination services aren’t always part of the church ‘club’. They can be family members or colleagues or friends who are there because they want to support a candidate, even if they don’t share that candidate’s beliefs. This was acknowledged at the end of the service when, as now seems to be standard, church members were asked to reflect on whether anything in it had prodded them to examine their own vocations, and those who aren’t connected to the church were invited to ‘talk to someone’ if something in the service had nudged them towards wondering what faith is all about. So if you are someone who isn’t a church member, how are you supposed to react to that invitation when you’ve been reading in the news about the abusive actions which a priest – who then became a bishop – was able to get away with, for many years? And here you are, seeing another bishop ordaining people as priests and listening to him formally asking the parish priests with whom the candidates have been working for the past year if ‘those whose duty it is to know these ordinands and examine them [have] found them to be of godly life and sound learning’?

Perhaps I’m over-thinking this. Perhaps those who aren’t Christians are more interested in how the Christians around them behave than in bishops who have recently been released from prison on licence. But I wasn’t too sure that the message there was always positive, either. Behind us in the nave were two people who had come to support a different ordinand from us. One of them, a man, was very talkative indeed. Even when we were told, 15 minutes before the official start of the service, that the candidates were now in a side chapel praying with the bishops, and we were asked to be silent and to pray for them, this man continued to talk, very quietly, but loud enough for us to hear him. It was clear from all he said that he was a church member, and that his particular C of E ‘club’ was an Evangelical one. In particular, when greeting two other people (both women) in his row, he insisted loudly on more than a ‘hello’: ‘Greet one another with a kiss! That’s what St Paul said! But no tongues. Well, not that sort of tongues’.

This made me feel so nauseous that I considered finding a seat elsewhere. Can’t I take a joke? Well, usually, yes. But not this week. Not this joke. Why not?

First, it was pushy, to say the least. In some contexts, it would be abusive; for example, if a man in a senior position in the church (and I’ve no idea whether this man was a minister, a lay reader, a sidesperson in his own church) said the first part to a woman or indeed to a man who didn’t want even a peck on the cheek from him. The Ball(s) business shows how much power an ordained person, and in their case one who is also a member of a religious order, has when telling others what is and is not behaviour acceptable to God. I think the comments from the man behind us are thus the thin end of a wedge, and the use of a Bible reference (the phrase about greeting with a kiss occurs several times in the epistles) to reinforce it sounds too much like Peter Ball’s insistence to his victims that praying naked with him and being beaten was somehow part of Franciscan spirituality, something which another priest commented (para 3.5.17) ‘is all rot……this is only an excuse for his lustful way of life.’

Second, the use of an in-joke. If you were in that cathedral as a vaguely-interested enquirer, would you get the reference to speaking in tongues? I suspect not. So, here we have the use of language to create a superior group, as well as the Bible being used potentially to abuse others. And what other issues in the C of E today does that remind us of…?

I blog on a range of subjects arising from various aspects of my life. On https://theretiringacademic.wordpress.com, I focus on my reactions to early retirement and think about aspects of teaching and research which I hope will be stimulating to those still working in higher education. On https://shared-conversations.com, I blog as an authorized lay preacher in a pretty standard parish church of the Church of England, who needs to write in order to find out what she thinks. I took part in the Oxford/St Albans/Armed Forces C of E 'Shared Conversations' in March 2016, worked on the Living in Love and Faith resources from 2017 and was elected to General Synod in October 2021, and continue to try to reflect on some of the issues. On https://mistakinghistories.wordpress.com I share my thoughts on various aspects of the history of medicine and the body. I also write for The Conversation UK on https://theconversation.com/profiles/helen-king-94923/articles
View all posts by fluff35 →
This entry was posted in Church of England and gender and tagged abuse, cathedral, club, Dean, Gibb report, godly life, kiss, litany, Michael Ball, ordination, Peter Ball, sermon, St Paul, tribes. Bookmark the permalink.

2 Responses to No tongues?